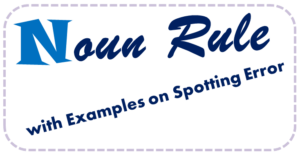 Today we will learn the uses of nouns with previously asked Spotting Error in the Exams. There are total 16 noun rules which are explained below with spotting error examples. if You have any doubt then you can check our youtube channel for all details given below.

NOUN:- A noun is a word used as a name of a person, place , thing, quality , condition and action.

The following words are uncountable and used in singular form as they don’t have plural form. Indefinite article should not be used with them.

Example – Physics is a difficult subject.
Billiards is an interesting game.
The news was wrong.
Statistics shows the great improvement.

Example –  I saw two sheep in the zoo.
A series of lectures is to be delivered today.
Four dozen eggs have been sold.

If two nouns are connected by ‘and ‘ and both are closely related, add apostrophe ‘s’ with the last noun.
Example – My mother and father’s choice is perfect.
His brother and sister’s study room is combined.

Example –The cattle is grazing.
Cattle are fighting among themselves.

Noun indicating numerals must be used in singular form

Example – A hundred rupee note
A ten mile walk
Two ten rupee notes
It was a two-hundred-page diary.
It was a ten-day job.
It is a one-step dance.

After following phrases use plural form of noun
One of Any of
Some of Each of
Either of Neither of
None of Most of / all of + the (If Noun uncountable – Singular; Noun countable- Plural)
Note – either / neither without ‘of’ takes the noun in singular form.

Example – One of my favourite players has come.
None of the articles has been sold.
Any of the boys can do this.

Q 4. The manager concluded that (A) / either Mahesh (B) /or teja were (C) / responsible for the last week`s theft (D) / No error (E).
Ans:- (C)
Explanation: – Either and Neither (without of) are followed by singular noun and take the verb in singular form ,replace plural verb ‘were’ by singular verb ‘was’.

`s can be used with anybody /somebody/nobody/everybody/No one /someone/ anyone
Example – Everybody`s business is nobody`s business.

Note :-
if ‘else’ is used after anybody/somebody use `s with else.
Example –
I like your website and not anybody else`s.

Apostrophe s can be used with each other and one another .
Example – They respect each other`s decisions.
we like one another`s dresses.

Make comparison between same cases of nouns either nominatives or objectives.
Example – There is no understanding between you and me.

Q 7. He looks (A) / more depressed than (B) / her but I don’t (C)/ know the reason (D) / No error (E).
Ans- (C)
Explanation: – Comparison should be between the same form of nouns. Here the comparison is between he (nominative case) and her (objective case), Use the nominative form of her – She

Use objective case of noun with ‘Let’
Let + obj + bare infinitive (infinitive without ‘to’)
Example – Let us go to the cinema tonight.

Q 13. Mohan has collected (A) / all the necessary documents (B) / and have written a good paper (C) / for his conference (D) / No error (E).
Ans. (C)
Explanation: – The subject ‘Mohan’ is a singular noun hence the verb used for singular noun must be in singular form ,replace have by has.

Ans. (B)
Explanation: – Subject of the given sentence ‘The unskilled class’ is a singular noun, use singular verb ‘is’

If You have any doubt than u can watch our  “Rules of Noun” & “Spotting Error” YouTube Video.

Rules of Noun for all SSC & Bank Exams

With this Noun with Spotting Error PDF, you can read all the important Spotting Error questions and prepare for examinations like Railway, SSC, BPSC, UPSC, etc. You can also easily get the latest updates from our LuckyExam YouTube channel and Facebook page.